[Updated – Sep 30th, 2016] @Sabasacustico added the schematics for the project https://github.com/salmg/MagSpoofPI/tree/master/Schematic open hardware for all.

[Updated – Aug 30, 2016] Instead of using WiringPI to run the MagSpoof after a succeed MagSpoofPI installation, I decided to use the GPIO library for Python. I noticed that WiringPI worked well in the Raspberry Pi Zero, but it did not work at all in the Raspberry Pi 3 model B using my code. So, I updated the code from C to Python to have just one code for all versions of Raspberry Pi to enable/disable the MagSpoof after the installation.

When I was doing my my research about Samsung Pay and its flaws, I noticed that I needed a device with the MagSpoof characteristics, but with more abilities to make modifications in its code as fast as possible.

Working with Samsung Pay tokens, I knew the necessary to modify the tracks in the MagSpoof code to implement a different type of tests. So I decided to make some adjustments in the MagSpoof library and make it available for Raspberry Pi using avr-gcc. Now, with a simple Python script, I am able to modify the library(MagSpoofPI) before build it, for example to change the tracks with some specific tokens and then compile and install it. It is a very useful tool for real-time tests.

MagSpoofPI will help if you already have a MagSpoof working, and you want to add it to the Raspberry Pi; however this design and the makefile could help if you just want to reprogram the Attiny85 by itself without Arduino dependency. The next steps are specifically to add connections from the Raspberry Pi to the MagSpoof/Attiny85. The only necessary changes in the original MagSpoof design to work with this project:

-Remove the button and replaced it with a 10k resistor.

I will use Raspberry Pi pin numbers(board numbers), NOT GPIO numbers to describe this article.
We will need four 1k resistors, connecting the Raspberry pins: 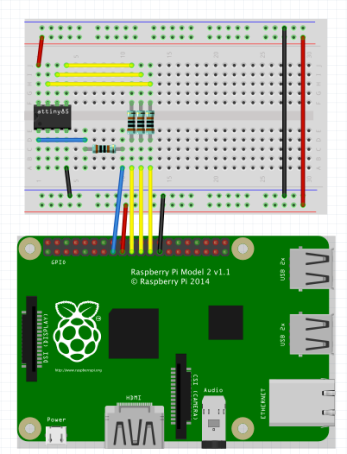 The pin 7 will help to control(on/off) the MagSpoof after a succeed installation of MagSpoofPI. So the end user will be able to enable/disable the MagSpoof without removing it from the Raspberry PI GPIO. So the pin 7 is connected to a 10K resistor. The another end of the resistor to GND.

Code to enable/disable the MagSpoof after a succeed installation of MagSpoofPI:

How to run it:

Implementing this project and JamSpay to test Samsung Pay flaw in real-time: